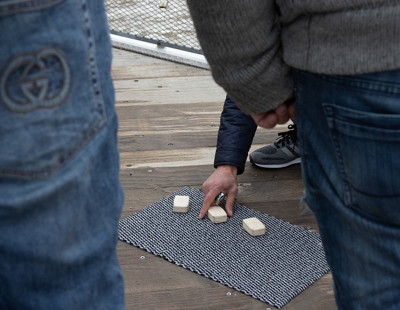 For as long as people have been able to win money courtesy of betting, there have been those that would look to take advantage of others. Most of us will have been walking down the road in a major city like Paris, London or Bangkok and seen a crowd of people gathered around a small table, with someone asking them to place bets on which ball the cup can be found under.

It’s a way that confidence tricksters can win vast amounts of money from unsuspecting tourists, disappearing off down the road the second that they see a policeman coming around the corner. Some of you will probably have fallen for such a trick and be desperate to know how it is that some people seem to win whilst you were on the losing end. The good news is that you’re not alone, with most of these tricks being hundreds of years old. 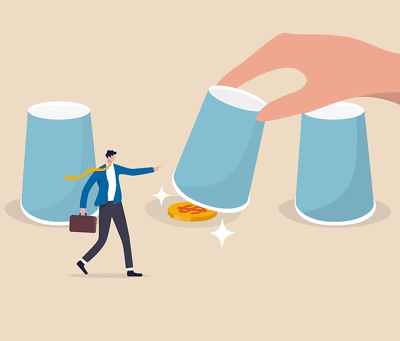 Let’s start by looking at the most famous trick of them all. You walk along a well-known tourist trap such as Westminster Bridge and see some people gathered around a table. Behind the table, a man is moving cups around, whilst a tourist taps one of the cups which is lifted to reveal a ball underneath. Good news for the tourist, they’ve won their bet and doubled their money, so they try again and win again. It looks easy, right?

In actual fact, the cups and balls trick is one of the oldest out there and was originally designed to be used for entertainment. As with other ‘magic’ tricks, the balls can appear to vanish, transpose, transform and reappear. In order to carry out the trick, the perpetrator must use a combination of misdirection, slight of hand, manual dexterity and managing the audience, which they’ve been doing for more than 2,000 years.

The adaption of the trick to con people sees three or more identical containers placed face-down on a table, cardboard box or other such thing. On occasions when the game is played honestly, an audience member is asked to guess which cup a ball has been placed under. If they guess correctly, they win money. In reality, these games allow confidence tricksters to use their sleight of hand to ensure that they never win.

Once they start losing, most people will continue to play to win back their money, meaning that before long they’ve lost more than they started with. If you’ve fallen foul to such a trick you shouldn’t worry, with evidence suggesting that it dates back to at least the time of the Ancient Greeks. Known as the ‘thimblerig’, games were often set up around travelling fairs, meaning that audience members have been parting with their money for hundreds of years. 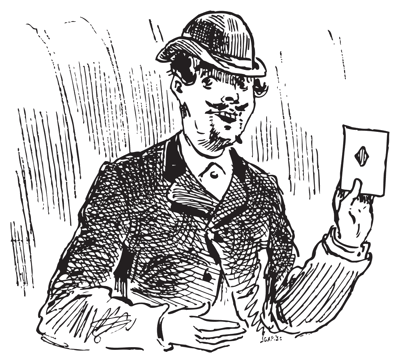 You might well have seen a similar setup to that used for the cups and ball trick but instead using playing cards. Sometimes referred to as ‘Find The Lady’, this is a confidence trick called the Three-card Monte. The idea is that the ‘mark’ will be able to correctly identify a specific card amongst three cards that are lying face down, with the confidence trickster encouraging them to bet money on their ability to do so.

It is known as a short-con, on account of the fact that the mark has no chance of winning and therefore won’t play very often. According to his book ‘Daily Life In The Middle Ages’, Paul B. Newman is of the belief that this trick was being used as early as the 15th century. The game is simple enough, with the dealer placing three cards face down and demonstrating that one of them is, for example, a queen.

The dealer then quickly rearranges the cards, asking a player to identify which one the queen is now. If they identify it correctly then they get their stake doubled, whilst if they don’t the money is lost. When a ‘mark’ walks up to a table they will usually see people winning and losing, meaning that the game looks like a fair one. They are given their chance to play, which is when everything falls apart.

The use of shills allows a dealer to never have to give a winning bet to a mark. If they pick the correct card, which will sometimes happen by chance, one of the shills will place more money on top of the card and the dealer will announce that they will ‘only’ take the highest winner. Once they have got the mark’s money, someone will announce that they see the police and the dealer will pack up his equipment and run.

The trick works thanks to sleight of hand, in which the dealer will often pick two cards up with one hand and one with the other. They will appear to be throwing the queen down when in actuality it is another card that they’ve put down, meaning that it is impossible for the mark to actually follow the queen. There are numerous variations of this same con, but they all end with the dealer winning and the mark being out of pocket. 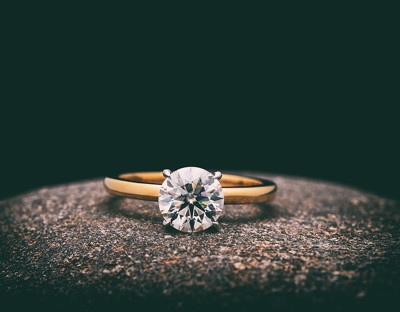 This one is a little more subtle and less likely to be spotted as a con. It involves someone walking along, stooping to pick something up and then asking you if it is yours. The thing that they picked up is a ring, usually gold and typically quite expensive looking. You’ll obviously say no, for you have not lost a ring, and they will give you a reason why they’re unable to keep it for themselves, saying that you should have it.

Because the ring is expensive looking, they will ask you for a small amount of compensation for allowing you to keep it. Obviously the ring is entirely worthless and they didn’t pick it up so much as they merely had it in their possession the whole time. The entire point of this is to lull someone into thinking that they’ve obtained something that they can later sell for a good sum of money, but it’s all lies and nonsense. 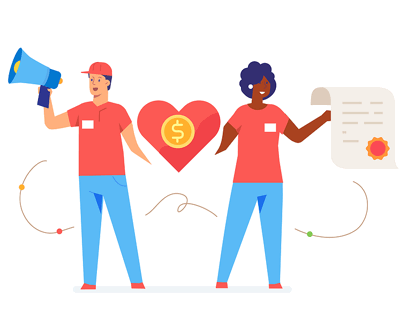 We all like to think that we’re activists at heart, but how many of us actually do something to try to change the situation that we would campaign against? This is the guilt that some confidence tricksters play into, heading to a popular tourist destination in a city and ‘campaigning’. The might be wearing t-shirts about the topic or holding signs, but one thing that they will definitely be doing is carrying clipboards.

Suddenly one of them walks over to you and tells you about the plight of a particularly animal, group or person. They ask you to sign their petition, which can’t do any harm, can it? Once you’ve signed, they then tell you that they’re raising money over the issue and ask you to donate. You’ve signed a petition, but surely you want to take more action than just that? Money will make all the difference, so can you spare £20?

Obviously the entire thing is fake. There is no campaign, the people demonstrating aren’t real and the entire thing is designed to make as many people as possible part with at least some of their money. Once you have, they’ll soon disappear with the cash that you’ve given them and you’ll never hear from them again. Alternatively, if you don’t give any money, the might sell your information or use it for their own benefit.

The Principles Of The Scammers 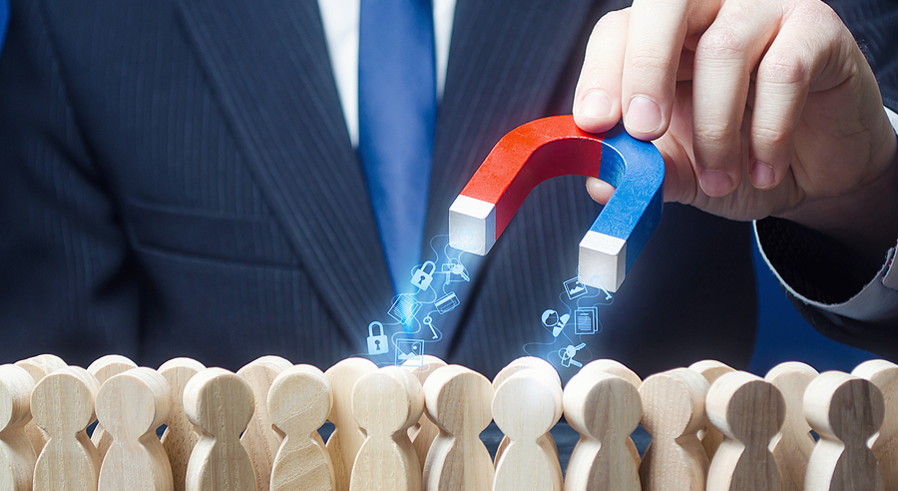 Regardless of the scam that you’re being targeted for, there are seven different principles that the con artist will employ at least some of in order to get their hands on your money. If you know what these are and are able to keep an eye out for when they’re being used, it increases your chance of avoiding falling foul to the world’s confidence tricksters. They’re used in different ways, but they all still have the same basic principles in play.

Scammers want you to be distracted by something, at which point they can get away with virtually anything. Perhaps there’s a beautiful young woman who is used to gain the attention of a male mark, or a puppy dog that distracts a woman. Regardless of what they’re using, con artists take advantage of your attention being elsewhere to ensure that they can get money from you for their own benefit.

Generally speaking, people do not question authority. The scammers using the Three-card Monte will see some ‘police’ and run away, but victims of the scam are unlikely to chase after them because they know that the perpetrators are bad people. They might well wait around to speak to the police, but given there almost certainly weren’t any in the first place they might have to wait around for a long time.

Marks are likely to let their guard down if they feel that they’re risking the same things as other people. It is why it is so common for confidence tricksters to work with others, who they allow to ‘win’ at the various games before the mark is allowed a turn at playing. Having seen others be successful at one thing or another, people believe that they’re part of a crowd and therefore stand a better chance of being successful.

There is an old trick that confidence tricksters pull off in which they persuade people that they can recharge their pass for the underground railway system for free. This is obviously illegal, but there’s nothing wrong with helping yourself out a little bit, is there? The mark will give them an amount of money to ‘recharge’ their card, only realising it hasn’t been recharged at all when they try to use it. Because they know they’ve broken the law themselves, they’re unlikely to seek restitution from a legal resource.

All scams are a form of deception. They work because people tend to believe what they have seen with their own eyes. The person walking along the road stooped to pick something up, showing you an expensive looking gold ring. You saw it happen, so it must be true, mustn’t it? Confidence tricksters use the principle of people believing what they see to their advantage, fooling them into doing what they want them to.

One of the main things that a confidence trickster depends upon is the fact that we all want to make a quick buck. Most of us are inherently greedy people, needing more in our lives at all times. The chance of winning some money simply by following a ball in a cup is too much for us to resist, so we take it. Tricksters know this, so they keep a look out for people who are willing to take a chance on what is effectively a get-rich-quick scheme.

Time Pressure Works Against Us

Last but not least is the principle of time. Confidence tricksters will set themselves a certain amount of time in which they can win over their mark. If they haven’t fallen for the scam within this time period, it is likely that the more rational side of their brain is going to kick-in and they will never fall for it. If you don’t act quickly, you’ll miss the opportunity to make some money, at which point our rational reasoning is abandoned and the con artist knows it.