Sports are one of the most common forms of exercise and entertainment in the world. Whether it be football, tennis, golf or rugby, there are plenty of mainstream sports that people enjoy either watching or taking part in virtually every day of the week. Though they have remained extremely popular, there are plenty of sports that were once all the rage but have since fallen by the wayside. Some have developed to become something else, such as football being virtually unrecognisable nowadays compared to the sport that it grew out of.

Yet others simple don’t exist anymore. They have stopped being played pretty much everywhere, perhaps only still remaining a thing in the most remote of locations. Many of these sports were once competed over in the Olympics, with the removal of them from the Olympic roster resulting in their slow demise over the years that followed. It is entirely understandable why some of the sports no longer take place, whilst others will seem like a sad loss from the world of competitive sporting achievement, depending on your point of view. 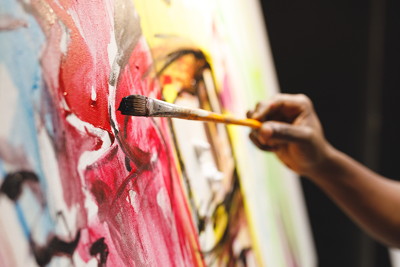 The best place to start is by looking at something that doesn’t even sound like a sport, let alone one that would have been competed over at the Olympics. Yet, remarkably, that is exactly what happened with competitive art, with ‘athletes’ taking each other on in a range of categories between 1912 and 1948 in the Summer Games. The ‘sport’, such as it was, was based around the following five categories of artistic pursuit:

There were two main rules, which were that the works that were created had to be inspired by sport and had to be completely original. Over the years, the rules were tweaked and the five categories were developed further, but you get the general idea. It was all the thought process of Pierre de Coubertin, who wanted to pursue the idea of exercising the mind as well as the body. What make it all the more interesting was the fact that the Olympic events rarely stuck to their own rules and were entirely rife with corruption.

That is hardly surprising when you think about the fact that we’re talking about something that is based entirely on opinion, of course. In the Literary section of the sport, for example, works eventually had to be one of either drama, epic or lyrics, with a 20,000 world limit imposed. In the initial event a poem entitled ‘Ode To Sport’ by Georges Hohrod and Martin Echsbach won the gold, but the slight problem was that neither of those people exist. The piece was written by de Coubertin and he invented the names of the writers.

If you want an example of a game of skill that is no longer around but that is still recognisable to many, you need look no further than the Ancient Greek game of Kottabos. It was played at drinking parties and is perhaps most similar to the modern phenomenon of Beer Pong. That is slightly misleading, but it did involved alcohol and throwing. The sediment of wine would be thrown at a target in the centre of a room, with the participant taking up their aim whilst laying on a couch and using only their right arm.

The writer Antiphanes explained the rules of the game as follows:

“The Kottabos player puts the index finger of the right-hand through the handle of the drinking cup, palm upwards; and the remaining fingers are spread as playing a flute.”

From there, the player, whilst reclining on the couch and leaning on their left elbow, would only be allowed to move their right-forearm in order to throw the wine-lees. They would be aiming at a small disc, called a plastinx, that would be balanced horizontally on the end of a bronze lamp stand. The hope was that the wine-lees didn’t break its bulk as it flew through the air, with success coming when the liquid made the disc fall and make a bell sound. 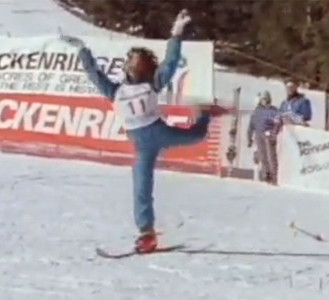 Sometimes called ‘Acroski’, the notion of ski ballet was all the rage for a short period of time. It came into existence in the 1960s before reaching prominence in 1988 when it was introduced to the Winter Olympics as a demonstration sport. Remarkably, it lasted for two Olympics and appeared again in 1992, in spite of the fact that it was, objectively, rubbish. Indeed, it kept going even once the Olympics no longer wanted anything to do with it, only really dying a death when the International Ski Federation shut down all competitions in 2000.

In many ways, Ski Ballet was the perfect sport for the 1980s, given that its competitors opted for big hair and brightly coloured clothing. It was a singles event, in the sense that people did it on their own rather than everyone taking part was single, asking competitors to go onto a smooth surface to perform. Routines would be best described as ‘wild’, featuring such moves as using the ski poles to launch into the air for a flip or spin. Routines lasted for 90 seconds and were performed in sync to music of the athletes own choosing.

If you want to get a sense of just how bonkers it was as a sport, music wasn’t even introduced until the middle of the 1970s, meaning that the original competitors simply did their own weird dance moves in skis and on the snow for the first decade or so. The judges watching the performances would score it on each of the following three categories:

The performers would then be awarded a score in a similar manner to how figure skaters are given points based on their performances. As a demonstration sport, of course, the medals were not counted towards the official medal table, meaning that the participants were only able to take their own sense of pride at a job well done home with them. 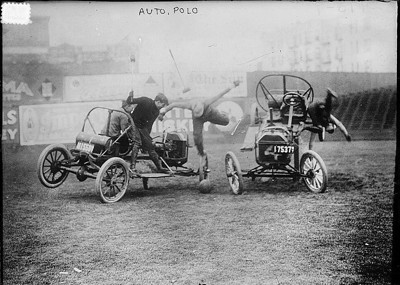 The Library of Congress, Public domain, via Wikimedia Commons

Technological advancement has long meant that old fashioned methods of doing things have fallen by the wayside. Cars talk about ‘horse power’ because of how many horses would have been needed to pull them to get the same sort of power and speed behind them, based on the fact that horses used to be the old-fashioned method of transportation. As a result, cars replaced horses as the way that we would get around the place, so surely it makes complete sense for them to also replace horses when playing polo, right?

It will surprise virtually nobody to learn that the sport was invented in the United States of America, becoming popular during the early part of the 20th century. It was initially played both outdoors and in indoors arenas, with the minimum space requirement being 300 feet by 120 feet. As with the more traditional form of polo, the aim was to score goals by striking the ball through posts using a stick. Teams consisted of two cars, with one player taking the responsibility of driving it and another being the person in charge of hitting the ball.

The ball used was a regulation basketball, whilst the sticks were similar to croquet sticks but with a three-pound head. Though it did prove popular initially, its popularity died out almost as quickly as the sport had arrived on the scene. Frustratingly for its proponents, what made it popular was also what ended up killing it off. The crashes and accidents appealed to audiences but it was too dangerous to be allowed to carry on. In Sri Lanka in 2016, a new game called Tuk Tuk Polo was invented and is something if a revitalisation of the sport of auto polo. 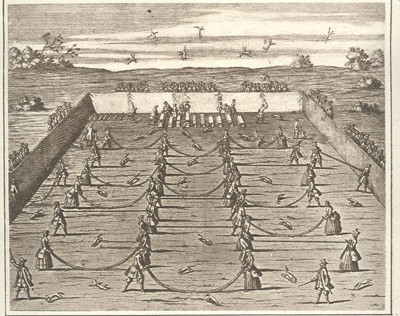 We have decided to put these two ‘sports’ together for the simple reason that their ludicrous brutality has no place in the modern world. Fox tossing was popular in the 17th and 18th century and was played throughout Europe. As the name suggests, a team of people would throw a fox into the air, with the team that threw the fox the highest winning the points. The only good thing about it, if you can call it a good thing, was that the people were not holding the fox by its feet and head but instead had to get their timing right.

The competitors would stand about 20 feet apart, holding the ends of cord sling that was attached to a circular piece of canvas. A fox or similar animal was let loose into the arena and the players needed to get their timing right, pulling on the slings at the right moment to propel it into the air. The highest height recorded was 7.5 metres, with wildcats often not used for the would ‘bury their claws and teeth in the faces or legs of the tossers’ or ‘cling to the tossing-slings for dear life’. Good old wildcats.

Though the foxes invariably died whilst being tossed, they still suffered a less gruesome ending than the geese that were involved in the sport of goose pulling. A goose would be hung by its legs, sometimes from a piece of rope and sometimes a pole, whilst a competitor on horseback would gallop by. The aim of the sport was to grab the goose by its neck and pull its head off. The sport would often be made more difficult when the goose was rubbed in oil, making it harder to grip. Popular in America, it died out in the wake of the Civil War. 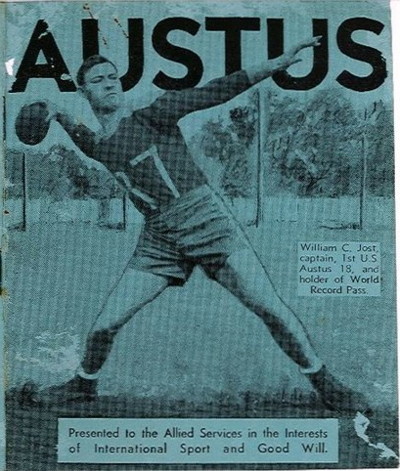 Speaking of Americans, they were largely responsible for the invention of Austus during the Second World War. This hybrid sport was created when Americans stationed in Australia wanted to play football against their hosts, but neither knew the rules of the other’s sport.

Cowley described it as being ‘99% Australian rules with the addition of gridiron highlights’, which is a fair summary of what the game entailed. The first game of the sport was played in 1943 at Punt Road Oval, with one team comprised of US servicemen and the other made up of Australian explosive factory employees. 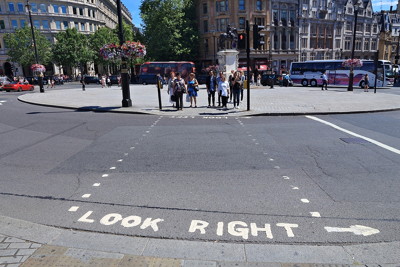 Next time you’re walking along the road and feel as though you’ve got to pick up the pace in order to stay in front of the person behind you, bear in mind that you’re inadvertently taking part in what was once a competitive sport. There was no specific technique or rules involved, but the sport was effectively a form of competitive walking. Whilst the rules were thin on the ground, competitors were expected to extent their legs straight at once during their stride as well as obey the ‘fair heel and toe’ rule, which said that the toe of one foot couldn’t leave the floor until the toe of the other was on the ground.

The sport became codified in the late part of the 19th century and was actually included in the early Olympic Games. It had been a popular spectator sport in the United Kingdom before making its way across the pond to the United States of America. It is believed that it grew out of the habit of aristocrats wagering against one another about how quickly their footmen could carry their carriages. The sport developed into race walking, which is competed at the Summer Olympics over 20 kilometres for men and women and 50 kilometres for men alone.